The NPF held one of its rare meetings in Leeds on 17 and 18 February. The programme included an address by the party leader, three plenary sessions, one on the democracy review, one on health policy and one on Brexit. In addition, there were three breakout sessions during which parallel workshops looked at the draft consultation documents prepared by the eight policy commissions.

The meeting got off to a bad start when the expected election of a new NPF chair was postponed. The row has been well enough covered elsewhere and I can add little to what has already been reported. However, we once again endured a heated debate over a procedural issue which was a proxy for a political question, the politics of which were never openly aired. 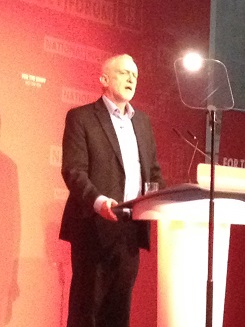 Jeremy Corbyn gave an inspiring speech which had its focus on the coming local elections. He set out a vision of Labour local government, drawing on examples of innovative practice by Labour councils which were tackling the real issues of concern to communities. Housing, social care, policing and community safety as well as employment and the living wage all featured as areas where Labour councillors are delivering for their people.

The main plenary session on Saturday concerned health and social care policy. Jonathan Ashworth, the shadow health secretary, gave an excellent overview of the issues affecting health policies. He set out the many difficulties affecting the NHS at present and introduced the key policy ideas shaping the Labour Party’s response. He focused on health inequality, it different aspects and consequences. NPF members held small group discussions which were fed back to the plenary.

The party is reviewing its policymaking structures in the “democracy review”, which is consulting on what works well and less well, how the system can be improved and what other systems can be used. The session was an opportunity for members to reflect on the strengths and weaknesses of the NPF.

The most interesting panel was at the plenary which dealt with Brexit.

The discussion at my table was dominated by a recently elected MEP which did not make for a fruitful exchange.

In summing up, Keir made the point that leaving aside the question of the precise institutional framework, the Labour Party was broadly united in wanting to maintain a close, economic, political, social, and cultural link with the EU. By contrast the conservatives are deeply divided, some for a close, others for a distant relationship with Europe.